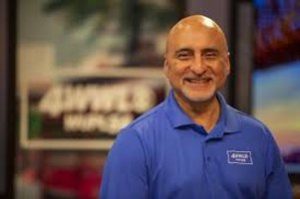 This is the last week on the air for New Orleans chief meteorologist Carl Arredondo.

He’s leaving Tegna’s WWL after 28 years due to medical reasons.

Arredondo is dealing with retinitis pigmentosa which is described on the National Eye Institute’s web site as a “rare, genetic disorder that involves a breakdown and loss of cells in the retina.”

The site says that commons symptoms include “difficulty seeing at night and a loss of side (peripheral) vision.”

Arredondo says that eventually his failing eyesight will prevent him from being as effective as a forecaster.

“It becomes hard when someone sticks out their hand to shake yours and you don’t see it,” he said.

Expect a week of tributes, retrospectives and tearful goodbyes.

Post-television, he will be working with the Louisiana Lighthouse (for the Blind), where he already serves as a board member, to raise awareness of his particular disorder and other issues surrounding vision problems.

Good luck to you, Carl.