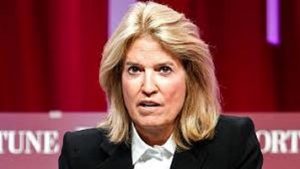 Cable news veteran Greta Van Susteren is trying out local TV by joining Gray Television, which owns stations in more than 90 markets across the United States.

Van Susteren will be chief national political analyst for Gray.

Van Susteren will provide Gray TV’s newsrooms “with the expert, unbiased coverage of national and international political developments that have been the hallmark of her distinguished news career,” according to  the Gray PR department.

She will also develop two nationally syndicated shows for the company.

“It’s a journalist’s dream to be part of a growing media company so focused on delivering quality news in local markets big and small through trusted, local institutions like Gray’s television stations,” we are assured Van Susteren really and truly said.

Van Susteren is NOT leaving the “Voice of America,” where she does a weekly program.

She hosts a program there that airs outside of our borders.

No stone-faced sycophancy from someone with a tenuous hold on the language.