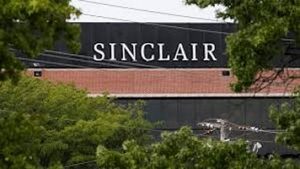 No doubt if you were passing through Hunt Valley, MD in the past 48 hours, you heard a huge sigh of relief which we have identified as Sinclair Broadcasting’s reaction to the FCC’s new Administrative Law Judge, Jane Halprin, granting Sinclair’s request that she terminate the hearing on its aborted deal to buy Tribune stations.

But don’t count them out of the woods just yet.

While the commission’s Enforcement Bureau did not oppose dropping the hearing, Halprin warned that the allegation Sinclair may have misled the commission was a serious charge that warrants further scrutiny in another context.

Industry watchdogs are weighing in on the actions Sinclair undertook in the Tribune deal and the need for further scrutiny of the company’s methods of operation.

“The FCC’s administrative law judge could have dismissed the proceeding on procedural grounds without further comment, but instead she issued a strong rebuke regarding Sinclair’s dishonest representations to the FCC, and all but insisted that the agency examine Sinclair’s lack of candor at the next opportunity,” said Free Press Policy Manager Dana Floberg. “Free Press is calling on the FCC to examine Sinclair’s dishonesty in early renewal proceedings. If the agency finds that Sinclair lied to the Commission, it should revoke Sinclair’s broadcast licenses and return the public airwaves to broadcasters that will serve their communities and comply with the law and with FCC rules.”

Some folks have long memories.