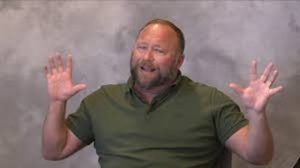 Early in March, performance/con artist Alex Jones sat down to be deposed by the lawyer of a Sandy Hook parent who has accused him of perpetuating an abhorrent hoax.

Which he unquestionably has, on so many levels, but the deranged notion that the Sandy Hook school killings were a “false flag” operation is probably the most awful.

He tried to blame “psychosis” for his reprehensible Sandy Hook rantings.

If that is the case, it is a psychosis that permeates every aspect of this con man’s “career” and has for years.

And since far too many people still rely on this demonstrably unbalanced shyster for “news,” we thought it would be nice to provide access to the deposition in full.

Part One is here.

Grab the popcorn, ice up a couple of beers and prepare to laugh as an Internet hoax is dismantled.