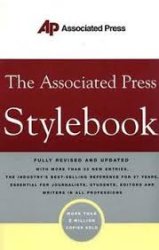 We still have mixed feelings about the Associated Press Stylebook, a bible for many of us over the years, telling us if something’s racist, journalists should call it racist.

“Racially charged” and “racially tinged” have been the go-to phrases used by many journalists in recent years.

And there certainly have been numerous occasions to use them.

But that has prompted some folks to criticize journalists for timidity.

Our personal problem is that the word is already, thanks to social media and amateur reporters, overused and virtually meaningless.

There is a certain nuance to the terms “racially charged” and “racially tinged,” while racist instantly devolves into name-calling that has been employed to the point that it makes no point at all.

Sort of like “politically correct” which has now become a term that derides polite and civilized behavior as opposed to its original meaning of saying things to conform to a certain viewpoint.

The AP’s changes, rolled out just before the weekend instruct, “Do not use ‘racially charged,’ ‘racially motivated,’ ‘racially tinged’ or similar terms as euphemisms for ‘racist’ or ‘racism’ when the latter terms are truly applicable.”

In addition, the Stylebook also notes that using “racist” as a description “need not involve examining the motivation of the person who spoke or acted, which is a separate issue that may not be related to how the statement or action itself can be characterized.”

Which becomes a slippery slope.

Employing the word in stories needs careful consideration. Every time.