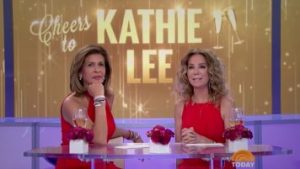 On her 11th anniversary of her tenure as co-host  the fourth-hour “Today Show” winefest, Kathie Lee Gifford said her last goodbye on Friday.

The endless farewell tour that began back in December came to a close with yet more teary tributes, a studio audience in the space once occupied by the late and unmissed Megyn Kelly and, of course…some last glasses of wine.

Jenna Bush Hagar  is ready to jump in as the Gifford replacement on the soft-focus hour.

As for Gifford – well lots of plugs for her seemingly endless array of upcoming projects – “Then Came You,” the film she’s making with Craig Ferguson, a new project which will be another film, this one based on Jimmy Wayne’s book “Walk to Beautiful,” and, of course, plugs for both her 30-plus year relationship with Carnival Cruises and her wine brand GIFFT.

Her agent drove a hard bargain with NBC.