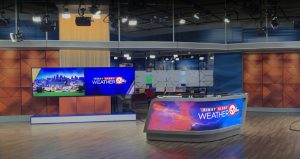 Newscast Studio reports  KMBC wanted the set to feature a variety of venues for story telling along with a strong visual connection to the local community, with the latest in set technology.

The main anchor area is backed by 9 vertically mounted 55-inch displays from Primeview.

This sweeping video array can also be used for stand-ups or walk-and-talk segments by talent.

A 90-inch display is located between the anchor desk and weather areas.

Previously, KMBC utilized a set design that allowed for a variety of “working” backgrounds including the station’s control room and newsroom.

The station moved to its current broadcasting facility in 2007, leaving downtown Kansas City after 60 years.