In San Francisco California, Police raided the home and office of a freelance journalist Friday morning as part of an ongoing probe into a leaked confidential police report containing details about the death of late Public Defender Jeff Adachi. 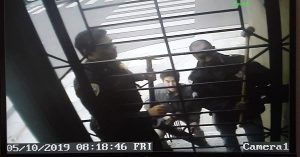 Freelance journalist Bryan Carmody told the San Francisco Examiner that his home and office were raided by police and FBI agents because he had a copy of the police report, and sold information from that report to the press following Adachi’s death on February 22.

The leak drew wide condemnation and prompted members of the Board of Supervisors to call for the police department to investigate and hold accountable the source of it within the department.

Two weeks prior, Carmody said that he was interviewed by police officers about where he obtained his information, but refused to disclose his source.

Carmody said that police and FBI agents executed a search warrant on his Richmond District home and Western Addition office.

They took his cell phones, computers and a copy of the police report from within his office safe.

A San Francisco Police Department spokesperson defended their action in a statement Friday, saying that the warrant was granted by a judge and the raid was “part of an ongoing criminal investigation into the leak of the Adachi police report.”

The San Francisco Chronicle reports the Police Department drew sharp reprimands from city politicians after the report showed up on television newscasts and in print only hours after Adachi, 59, collapsed and later died.

It rattled City Hall, creating a new drama that overtook the news of Adachi’s death. The public defender was a key figure for local progressives but also a vocal critic of the police, leading some to say the report’s unauthorized release was politically motivated.

Police immediately started a probe, which led investigators to freelance videographer Bryan Carmody, who says he received the report on Adachi’s death from an unidentified source inside the Police Department. He sold it to three television news stations, but wouldn’t identify them.