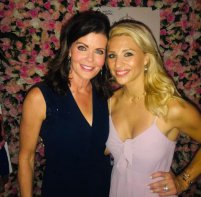 After 15 years of delivering the news at Graham Media’s WPLG in Miami, Laurie Jennings (left) signed off last night, shedding a few tears in the process..

It will be a seamless, albeit temporary and dry-eyed, transition as Nicole Perez (right) slides into the former Jennings chair – tonight.

“Anchor Nicole Perez will fill the spot temporarily for the next couple of months while we conduct our search,’’ said Bill Pohovey, vice president and news director at the Pembroke Park station.

Jennings spent 21 years in South Florida, landing at Sunbeam’s WSVN from its Boston sister station WHDH in the late 90’s before skipping over to WPLG in 2004.

For now, she plans to spend more time with her elderly parents and her twin teen-age sons.

Any other plans are none of your damned business.

More News from Thursday, May 23, 2019View As Newsletter