One of my friends about five years back was breaking ground in the world of Podcasting. 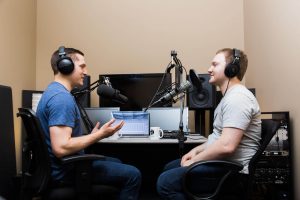 He said people like to listen to other people or watch online talk about a myriad of subjects.

The Broadcast Journalist in me, trained from caveman times that TV was the only medium, doubted what he said.

Here I am writing for you and my friend just bought a house in Malibu.

The podcast industry is growing fast; the industry generated an estimated $479.1 million in revenue in 2018 and is expected to produce more than $1 billion by 2021, according to a new report from the Interactive Advertising Bureau (IAB) and PwC.

The latest revenue figure represents an increase of 53 percent in just a year.

The shift to podcast ads backs up what industry titans, like Spotify, have been saying for months.

The company plans to spend up to $500 million this year on podcast-related acquisitions. It’s acquired not only content studios — Parcast and Gimlet Media — but also a creation app — Anchor.

Another Spotify-owned entity, Soundtrap, also released a new tool specifically designed to help with podcast creation. The Spotify team has already said it plans to build out its podcast ad business, which could end of conquering a decent portion of the revenue.

Bottom line: If your reporters/anchors or station personnel are not already doing podcasts, check into it quickly. Podcasts are here to stay.