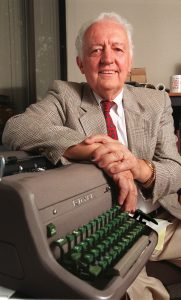 Welti began his television career in 1948 at the pioneering KDYL-TV, Salt Lake City’s first TV station. KSL hired him and sportscaster Paul James away to work with lead anchor Dick Nourse in the 1960s, and the trio embodied KSL’s on-air personality for decades as the station rose to lead the market.

Former station weatherman Kent Norton, who worked with Welti for years, said in an interview with KSL that Welti had an “extraordinary ability” to communicate with viewers. “It’s something you’re born with,” Norton said, “being able to connect with people one-on-one, through the camera.”