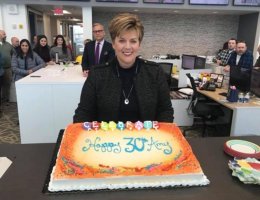 Back in February, the folks at Gray’s WMTV in Madison, WI went to all that expense for a big ol’ slab of processed sugar to celebrate weekend weather anchor Amy Carlson’s 30 years with the station.

Now she’s headed for the exit.

Carlson announced she’s stepping down at the end of the month.

“This is not a decision that I made lightly. The crazy work hours that are the nature of broadcasting have taken their toll. I’m ready to sleep past 3 a.m. on weekend mornings and go to bed before midnight on weekday nights,” Carlson shared. “While the hours may have been the worst part, the best part was meeting some fascinating people in our community doing extraordinary things.”

Her co-workers and station management got the word last month and viewers just got clued in.

She came to the station from working at a tv station in her hometown of Rockford, Il.

She was hired as a Creative Services writer/producer but within a year, was firmly planted at the weather set.

Future plans right now consist of sleeping in and enjoying the summer weather.