Yeah, we figured using “naked” in the headline would get your attention. 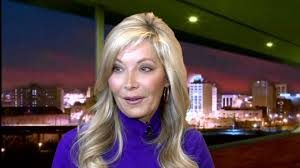 Northwest Ohio tv viewers likely remember Catherine Bosley from her years of reporting and anchoring the news, first in Youngstown and later, after an unfortunate and humiliating night in Key West, Cleveland.

Bosley was quickly fired from her Youngstown job, a job she held for 10 years, back in 2003 when video of her dancing topless in a Key West nightclub surfaced before viral was even known as viral.

Bosley was in Key West with her husband celebrating a successful surgery and got carried away in that town’s perpetual party atmosphere.

Even after she was hired at WOIO in Cleveland, the incident followed her.

Bosley, now out of the tv business for five years, now lives in Boardman, OH and is the subject of a profile in the “Akron Beacon-Journal” about her new mission in life – warning people of the dangers of life in the unforgiving glare of social media.

She even put together a TEDx Talk on the topic : “My Naked Nightmare: a lesson in surviving humiliation.”

She speaks to middle-school, college and corporate groups, acts as a personal coach, is working on a book and occasionally freelances for WOIO, focusing on the issue of cyberbullying and overcoming the psychological toll it exacts on its victims.

Bosley’s message is that, if you DO screw up, it’s not the end of your world.

“There’s life after this,” she says. “And it can be a very rewarding life.”

As she emphasizes near the end of her talks, “This. Too. Shall. Pass. I promise. I’m living proof.”