We were at a family reunion this weekend in a town where the local tv station is owned by Nexstar.

And family members who had driven into town and were staying at a hotel that had DirecTV were…..shall we say….extremely put out that they couldn’t watch the station they grew up with.

Here’s the headline on the most recent Nexstar press release:

Here’s what it should read: “WE WANT PAID MORE BY DIRECTV AND IF IT ENDS UP COSTING YOU MORE IN YOUR MONTHLY SATELLITE BILL (AND IT WILL) WE REALLY DON’T CARE.”

DirecTV already put up their defense in this graphic in the space where Nexstar stations used to be on their channel lineup: 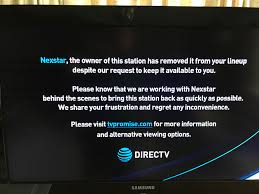 In the end, the two media giants will kiss and make up, reaching a settlement which will be none of your damned business but will ultimately be passed on to you in your DirecTV monthly bill.

And you can sit back with your remote and happily resume watching whatever it is Nexstar has to offer.

Until the next retransmission dispute.