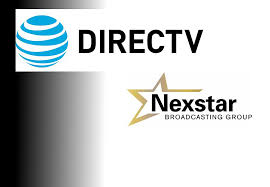 Now that the standoff between AT&T and Nexstar is ready to enter its 7th week with no sign of any progress on either side, we thought we’d check to see what the two sides are telling their customers/viewers.

If what we encountered in checking the Nexstar station website closest to us, Nexstar has left viewers in the dust.

While we don’t have access to the on-air signal, this is the information that WTAJ in Altoona, PA has on its website. 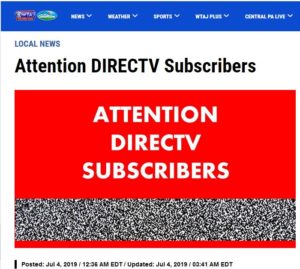 Note that the item was posted on July 4th and hasn’t been touched since.

Now if someone wants to snarkily point out that more may be getting addressed on-air, we will just as snarkily counter that DirecTV customers can’t see the station – so any updates are lost to them and wasted air-time for anyone else.

We will also point out that an awful lot of people want to blame this on CBS.

When we informed the folks that we talked to that this was a dispute between the OWNERS of WTAJ and AT&T, the nearly-universal answer was something like “Oh so it’s NOT CBS…it’s….what’s the name….Nexstar?”

Or Deathstar as some local wags would have it.

AT&T’s update for consumers is only a little better.

But to the average consumer, it’s going to look like they put a lot of thought and work into it.

If you plug in a zip code for where you live, you get this:
We had hoped to prevent Nexstar from pulling WTAJ-CBS from our Johnstown and Altoona customers’ lineups and we offered Nexstar more money to keep it available. Nexstar simply said no and elected to remove it instead. Nexstar has chosen to hold our customers in Johnstown and Altoona hostage and put them into the center of its negotiations. This is the same old Nexstar playbook. They pull or threaten to pull their signals from customers of many distributors to increase fees for “free TV” stations that far exceed their value. They’ve done it to Cox Cable, DISH and Charter Spectrum and now to us.

CBS broadcast network content aired by WTAJ-CBS has lost about half its primetime audience over the past five years. Despite this viewership decline, Nexstar is now demanding the largest increase AT&T has ever seen proposed by any content provider . In addition, Nexstar wants much higher payments for stations and a low-rated cable network they don’t own, as well as carriage commitments and still more fees for channels that don’t even exist.

By making these types of demands, Nexstar is reducing consumer choice. This behavior should not be rewarded by allowing Nexstar to become the largest broadcaster in America through its proposed acquisition of Tribune Broadcasting’s 42 local stations.

AT&T remains on the side of customer choice and value. Our goal is always to deliver the content our customers want at a value that makes sense to them. Nexstar is only on the side of gouging their affiliates and consumers for free over-the-air stations that are viewed less and less each day.

Viewers can watch WTAJ-CBS over the air on channel 10 and often online at the station website. CBS typically streams primetime series at CBS.com and to fans using the CBS mobile app. CBS also makes its shows available via the CBS All Access streaming service, often with a free preview period. We’ve always fought hard on our customers’ behalf and that’s why we are fighting for them again here. We regret any inconvenience Nexstar has caused and appreciate our Johnstown and Altoona customers’ patience. These types of dispute are often resolved quickly, and we hope that will be the case here as well.

So the real winner here is the CBS streaming service, which has seen a serious spike since both CBS O&Os and Nexstar went dark on AT&T platforms.

Nexstar’s 120 stations (which also include NBC, ABC and Fox stations) are not.

And may not be for a long time.