The new weekday anchor at Telemundo’s KUAN in San Diego comes from inside the building. 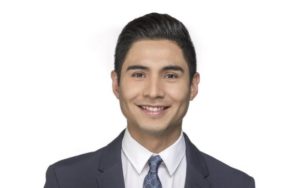 Rigo Villalobos was one of the charter members of the news staff that launched the station’s newscasts back in 2017.

Before KUAN, Villalobos worked at stations in Texas, Nevada and Los Angeles.