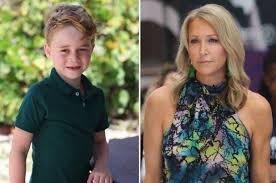 “Good Morning America’s” Lara Spencer had some bowing and scraping to do after she appeared to mock Britain’s little Prince George for taking ballet lessons.

Via Instagram on Friday: “My sincere apologies for an insensitive comment I made in pop news yesterday. From ballet to anything one wants to explore in life, I say GO FOR IT. I fully believe we should all be free to pursue our passions. Go climb your mountain-and love every minute of it,” Spencer wrote.

Social media exploded all over her on Thursday after her GMA segment about the curriculum assigned to the Prince.
“In addition to the usual first- and second-grade things like math, science and history, the future King of England will be putting down the Play-Doh to take on religious studies, computer programming, poetry and ballet, among other things,” Spencer said, pausing and prompting laughter from the audience. “Prince William says Prince George absolutely loves ballet. I have news for you, Prince William: We’ll see how long that lasts. I mean, he might! He might end up … Between the religious studies and the computer programming, I just want to go back to the Play-Doh!”

The bad news for Spencer is that an avalanche of Twitter criticism poured over her led by choreographers and dancers such as Debbie Allen (“Darling, you’re not on Saturday Night Live”), Jerry Mitchell’s (“Kinky Boots,” “Pretty Woman”) instant classic (“Laura, really? Some of us take ballet. Some of us win Tony Awards because we took ballet. Miss Thing, it’s 2019! Get a life!”) as well as Rosie O’Donnell, Broadway’s Tony Yazbeck and Michael Cerveris, “Dancing with the Stars” veteran Derek Hough and “So You Think You Can Dance‘s” Travis Wall.

Sometimes going for the cheap laugh is more trouble than it’s worth, Lara.