And wasn’t it also just last week that ABC got an earful for engaging another former White House press secretary, Sean “Easter Bunny” Spicer for the upcoming season of “Dancing With The Stars?” 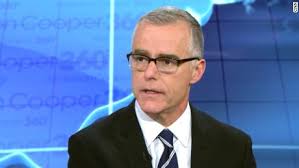 McCabe was fired from the FBI last year after DOJ Inspector General Michael Horowitz accused him of inappropriately disclosing sensitive information to a reporter.

McCabe is currently suing the Justice Department and FBI over his firing, arguing that it was a politically motivated decision – a conflict with his commentator role if ever there was one.

CNN so far hasn’t seen fit to defend its hiring choice, but had no problem throwing darts at FOX and ABC.

*We have no doubt that McCabe will be a peerless addition to the CNN roster of bloviators and gasbags.*

You know you’ve done a stupid thing when the three doofuses on the “Fox and Friends” kurvy kouch can justifiably laugh at you.