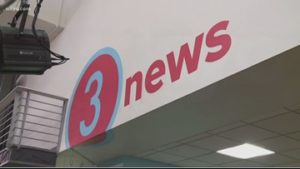 Well the reviews are coming in on the new look and radical rebranding effort by Tegna’s newly-minted WKYC Studios in Cleveland.

As we reported earlier this week, the old logo — a bold, italicized 3 that had gone unchanged for many years — has been updated with a more modern, thinner 3 enclosed in a circle, often in vibrant colors like coral and turquoise.

In addition, each newscast getting a new name to go along with its specific mission. The morning show is “3NEWS: GO!”, the 6 p.m. newscast becomes “3NEWS: What Matters Most,” the show formerly known as “Donovan Live” at 7 p.m. has been rebranded “3NEWS: Front Row” and the 11 p.m. nightly news now goes by “3NEWS: What’s Next.”

And what is the early viewer reaction?

“Not impressed. For starters, get rid of the left screen banner.

“I watched both the 6:00 p.m. and the 7:00 p.m. newscast. It’s very confusing they have this new thing called three loop um new format it’s going to have them fail. The flow is not easy to follow that bar that happened with the time temperature should be either on the bottom or on the right side of the screen. I guarantee you a lot of people will get laid off or fired within a year; then they’ll do rebranding 2.0

(ED. NOTE: This guy’s observation of another shift inside a year indicates someone who is uncomfortably familiar with tv news today)

“The stern of the Titanic is straight up and ready to sink into the depths!……That’s TV News! I tune in….look for news and get silliness. Watch out “WKYC Studios”….You’re making Ch. 19 look good!!!”

And the cruelest of all….

“lipstick on a pig”