Speaking of the Tornado, suppose you spend nearly 100-thousand dollars on a weather chasing vehicle, run countless ad’s all day and all night telling North Texans you are the “Weather Leader” and then you don’t interrupt programming to warn viewers of a twister on the ground? 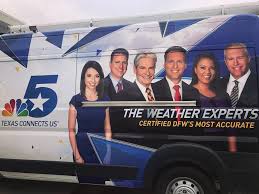 As we mentioned above, KXAS (NBC) received a glancing blow from critics Sunday night for not doing so and Monday was blasted online by viewers and media watchdogs like AwfulAnnouncing.com.

The website published this response from the NBC-Owned station:

During Sunday night’s Dallas Cowboys game, we made a mistake by not immediately interrupting the football game with a Tornado Warning.

Although our meteorologists were tracking thunderstorms across the area when the National Weather Service issued a Tornado Warning for Dallas County, we delayed breaking into programming for six minutes.

Our meteorologists were also streaming live weather coverage throughout the evening on our site, NBCDFW.com. We also alerted the football audience to our weather livestream throughout the game.

When it comes to dealing with severe weather, we know that seconds matter. We should have broken into football programming sooner. We apologize and want you to know that we’re doing everything in our power to make sure this does not happen again.

We look forward to regaining the trust of anyone we may have disappointed.

So while conflicts between weather updates and sports programming are far from new, this one is interesting for the far-from-standard outcome.

And that illustrates that continuing to show sports rather than immediately breaking into programming for a weather update carries its own criticisms.

In this specific case, those criticisms were strong enough to prompt this unusual apology from KXAS.