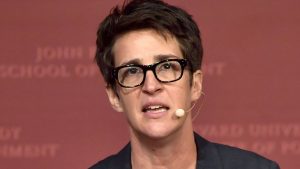 Now, Rachel Maddow has unloaded on the duo.

“It would be impossible for me to overstate the amount of consternation in this building,” the MSNBC host told viewers, bashing NBC management for letting Ronan Farrow‘s reporting on Harvey Weinstein “get away.”.

On the Friday edition of her nightly MSNBC program, Maddow said that she and her staff have “independently confirmed” that NBC News executives told Farrow to put a “pause in any new reporting” on Harvey Weinstein, backing up a claim he makes in his new book “Catch and Kill.”

Check out her opening monlogue:

Farrow was a guest on the program, showing up after her opening monologue was devoted to the Lack-Oppenheim mess and their roles in the spiking of Farrow’s reporting and their reported ignoring of Matt Lauer’s serial sexual shenanigans.

For its part, parent company NBCUniversal said Friday night it would release former NBC News staffers who believe they were sexually harassed from confidentiality and non-disparagement arrangements.

You can take that as a sign that the company continues to grapple with allegations made against it in the Farrow book.

You might also take it as a sign that once those former staffers start speaking up, life is going to get a lot more uncomfortable for Lack and Oppenheim.