Over the weekend, a lot of airtime and print space was devoted to the exploration of a butt-dial. 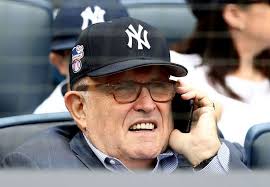 It seems that Rudy Giuliani, Mr. Trump’s personal lawyer, left two apparently unintended voicemails on a NBC News reporter Rich Schapiro’s phone this fall in which he discussed his need for hundreds of thousands of dollars and disparaged the Biden family.

After all the heavy-breathing coverage about unintended voicemails, it turns out there was no real news about what was being said in those voice-mails – or who was the person Giuliani was talking to..

But that didn’t stop NBC News from running like hell with it, with CNN and the “Washington Post,” among others, not far behind.

The real insult came from some anonymous Twitter wag who linked one of the many stories about Giuliani’s inadvertent calls and tagged it “The most boomerish faux pas ever.”

Kids, this boomer has made his share of inadvertent phone calls over the years ever since these so-called “smart phones” inserted themselves into his life.

But the number we’ve made don’t begin to match the number of butt-dials from our millennial daughters and their husbands.

Not even our 92-year-old mother has made an untoward number of butt-dials – although her Instagram feed occasionally turns up some interesting (G-rated) visuals.

Raise your hand if you own a smartphone and never have.

We would have preferred the reporter keep the story to himself and wait for the butt-dial that actually produces some news.

But now, presumably, Rudy will be more careful.