Just when folks in Northern California thought they were safe from a major fire this season the Kincaid fire erupted over the weekend and destroyed miles and miles of brush, trees and structures in it’s path.

News crews were stretched thin by this and others over the past few days.

The amount of fires we are covering in SoCal & NorCal and the lack of downtime between these serious incidents… is NOT normal.

When multiple homes burn and people die in a fire — we follow up w coverage for weeks. Not anymore. Too many back-to-back incidents these days. @ABC7

and the news brings back a not-so-good memory for CBS reporter Mireya Villarreal who told viewers she suffered a miscarriage while covering California wildfires in 2017. 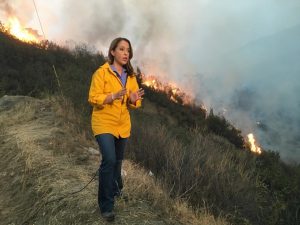 In her personal piece published on the CBS News website, she describes that day in 2017 while covering the wildfires near Yosemite National Park in California.

“I was standing on the ridge of a scorched hill…I had trekked 45 minutes to the top of this hill, and was drenched in sweat, but determined not to give up,” she wrote. “When we got to the top of the ridge, I should have felt a sense of accomplishment. I climbed this mountain with a male production crew, covered a major story that would affect thousands of people’s lives, and now I’m going to fight to get this story on CBS Evening News.”

Instead, Villarreal said she was in excruciating pain.

“It was like someone was taking a knife and stabbing my abdomen, right near the C-section scar from my first son” Villarreal wrote.

A co-worker told her she must have eaten a bad burrito for lunch. They had no idea she was nine weeks pregnant. She said only her husband, a few family members and a few female co-workers knew about her pregnancy.

“The bleeding wouldn’t stop. There were no bathrooms close by and I was worried I’d bleed through several layers of clothing and then everyone would see the pain I was going through on my bright yellow fire-retardant suit. But it didn’t. And for that, I’m thankful,” she wrote in the essay.

Villarreal’s personal story has gained plenty of social reaction from women who have experienced a miscarriage to fellow and former co-workers sharing their support.