We know it’s tough times for much of the media these days, and the search for an audience of readers and watchers can lead down some interesting paths. 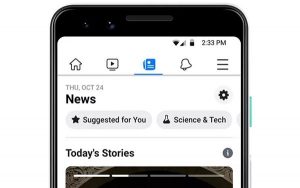 But we’re still wondering why so many prestigious outlets, such as ABC News, NBC News, “The Wall Street Journal” and “The New York Times” have hitched their wagon to the just-launched “Facebook News.”

That’s what Facebook is paying these partners, although the exact amount each is getting is none of your damned business.

We guess we can take some solace in the fact that at least hundred of Facebook employees have a conscience.

They are petitioning CEO Mark Zuckerberg to change the company’s divisive rules on political advertising that allow politicians to lie with impunity.

On Monday, The New York Times’ Mike Isaac reported that more than 250 workers at the Silicon Valley social networking giant have signed an internal letter calling on the company’s leadership to change course on its stance on political ads, which has become the latest political firestorm to engulf the company. 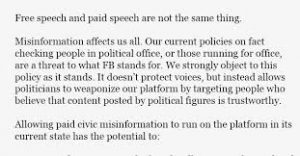 “Free speech and paid speech are not the same thing. Misinformation affects us all. Our current policies on fact checking people in political office, or those running for office, are a threat to what FB stands for. We strongly object to this policy as it stands. It doesn’t protect voices, but instead allows politicians to weaponize our platform by targeting people who believe that content posted by political figures is trustworthy.”

But will Zuckerberg and the rest for the “leaning in” executives pay any attention.

If what passes for real news outlets turn their nose up at fact-checking and setting standards for a major source of revenue like political ads, why would a social media site.

As long as the checks clear…..