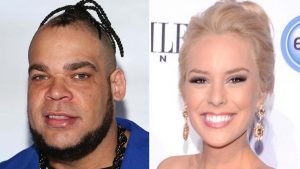 It turns out that, despite having said all was resolved after an investigation of Fox Nation host Britt McHenry claims of sexual misconduct against colleague Tyrus last June, Fox News acknowledged that it conducted a second investigation into her claims.

Tyrus is the one on the left, in case you were wondering.

McHenry, a former ESPN personality, has alleged that Tyrus, a retired wrestler, sent her sexually suggestive text messages and behaved inappropriately toward her in person.

The two were originally paired as co-hosts of the show “UN-PC,” which McHenry still hosts.

The litigation brought by McHenry against Tyrus and several Fox execs is ongoing.