Following the departure of TV veteran Jeff Brady in February, the KENS (CBS) San Antonio evening newscasts have seen revolving faces of anchors temporarily filling in on the desk. 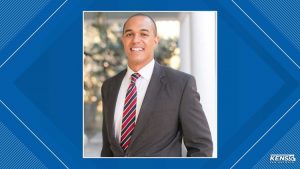 Now, KENS  has a permanent face for the 5 p.m. and 10 p.m. newscasts. Aaron Wright shared the news of his new anchor role on social media.

“Excited to share some personal news – starting tonight (Monday) I’ll be anchoring the 10 p.m. show with Deborah Knapp,” he wrote in a tweet. “We’ll be sharing the desk at 5 p.m. too! I’m proud to be part of what’s to come here at KENS-5.”

The Spartanburg, South Carolina, native moved to the Lone Star State and joined KENS 5 in January 2018.

He previously worked as an anchor and reporter at WBIR-TV in Knoxville, Tennessee.