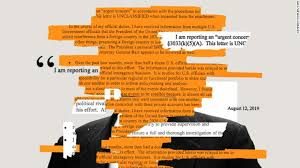 CNN is reporting that the brass at Fox News Channel has been repeatedly warning its hosts and personalities to refrain from identifying the whistleblower – Rand Paul notwithstanding.

That whistleblower, whose complaint ramped up the impeachment probe against Mr. Trump, has remained anonymous.

That has led to several Trump-friendly guests and hosts on Fox News to flirt with naming who they believe the whistleblower-to-be.

So far, not even Hannity has breached the edict.

While a number of right-wing websites with varying degrees of credibility have flirted with dropping the name, Fox is perhaps the only major component of the right-wing media machine that has, thus far, refrained from naming the person identified by that story.

That has been the position of so-called mainstream media from the get-go.

Russian media, however, complied with Paul’s Monday demand that the whistleblower’s name be be made public.