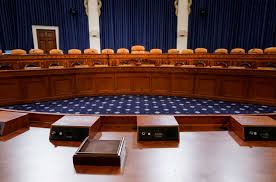 Public impeachment hearings start up this morning in the Capitol beginning at 10 Eastern time.

ABC, CBS, NBC and PBS on Wednesday will preempt their regularly scheduled programming for live coverage, as will the usual cable news suspects.

The networks have also dispatched their anchors to the Beltway.

For some context and comparison purposes, impeachment hearings for President Nixon in 1973 were also covered live on a rotating basis by the major broadcast networks ABC, CBS and NBC, while PBS carried the proceedings wall-to-wall for more than 250 hours.

For the second session, addicted viewers will have to wait until Friday at 9 AM Eastern.

Until then, you will have to be content with repeated dissections of everything that was said during today’s hearing on the cable network of your choice.