Alex Bozarjian, a reporter for Nexstar’s WSAV in Savannah, GA was assaulted on live television Saturday morning as she reported on the race at the Savannah Bridge Run route.

She is now speaking out over the slap and condemning the assailant’s grotesque actions. 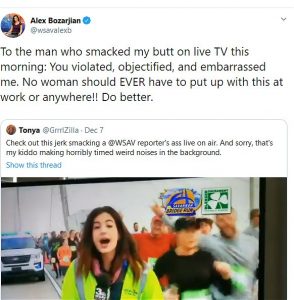 While dressed in a neon-yellow shirt and microphone in hand, Bozarjian stood alongside the route as runners passed her by with many whooping and cheering in the background of her shot when one participant sporting sunglasses and a long-sleeve blue shirt smacked her bottom as he ran past her.

This idiot has evidently been identified and police are now waiting to see how Bozarjian would like to proceed.