From St. Louis comes a heaving sigh of relief and hope for the New Year with the disappearance of Sinclair’s “chief political analyst” Boris Epshteyn from the local airwaves. 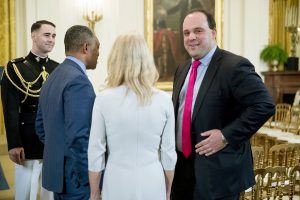 They are heaving sighs of relief at KUTV-Channel 2. Sinclair has gotten rid of Boris Epshteyn and his vile, partisan “commentaries.”

But I’m not sure that will be enough to clean the stain off the local newscasts.

Oh, both KUTV staffers and viewers are glad to have “Bottom Line with Boris” gone for good. His slavish devotion to his former boss, Donald Trump, was offensive to all but the president’s most ardent supporters. His xenophobia was hideous — he defended using tear gas on families (and small children) who he said had launched “an attempted invasion of our country.”

(Epshteyn will move into the sales department at Sinclair. Would you buy an ad from that guy?)

Yes, the segments — which Sinclair ordered its stations to run — were labeled as commentary. And, no, I don’t believe that anything in Epshteyn’s diatribes affected any of Channel 2′s news coverage.

But having them there could hardly help the way viewers perceived KUTV. Even if you’ve spent a fortune remodeling your home and turned it into a showplace, the run-down dump next door is going to make it harder for you to sell your house.

And even though Sinclair tried to put some window dressing on the Epshteyn segments by adding commentaries by a liberal, Ameshia Cross, back in January, it just served as a reminder that the company has a long, sordid history of inserting its right-wing political agenda into the newscasts on the 190-plus TV stations it owns or operates across the United States — including KUTV, KJZZ and KMYU in Utah.

But those Epshteyn segments aren’t the only issue that I find troubling when watching KUTV’s newscasts. It’s not just that the station is airing reports from “national correspondents” who are in the employ of Sinclair, but it’s the content of those reports.

I’ve seen more than one such segment that consisted of a reporter stating that the Democrats were out to impeach Donald Trump, followed by clips of the president denying he’d done anything wrong. No context, no balance.

No, local newscasts are generally not replete with context and explanations. They’re more about headlines and soundbites. But when you’re operating under the weight of a corporate reputation that you’re biased in favor of right-wing agendas, wouldn’t it make sense to take particular care to disprove that with balanced reporting?