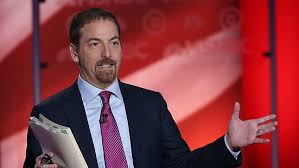 Over the years, we’ve noticed that no one appears to enjoy talking down to his audience than NBC’s “Meet the Press” host Chuck Todd.

So it must have been catnip for those viewers who have sensed Todd’s scorn to be able to turn the tables.

Todd’s recent admission that he was “naïve” about disinformation campaigns mounted by the Republican Party and the Trump Administration unleashed a wave of scorn on social media (where else?)

Isn’t this the Chuck Todd on whose very own program back in 2016, Trump spokesperson Kellyanne Conway introduced the concept of “alternative facts”?

You know – the earth is flat.

The sun comes up in the west.

The moon is made of green cheese.

The moon landing was staged on a New Mexico soundstage.

In an interview with “Rolling Stone”, Todd was asked about Sean Spicer’s lies during his time as the White House’s press secretary, Todd confessed he “really believed they wouldn’t do this” at the time.

He called his 2017 line of thinking “just absurdly naive in hindsight.”

Chuck Todd said he was ‘naive’ not to realize the GOP lies.

Todd’s problem is “Not naiveté, it’s a willful blindness to what the GOP had become. It’s a lack of imagination, a failure of insight”

Nicole Wallace on the other hand …

When @ChuckTodd says he’s naive, he is also trafficking in disinformation. He and his ilk made a choice in 2016 to profit off Trump’s lies under the cover of neutrality. Millions have suffered as a result. I wrote this six months ago. https://t.co/9oYEuNZZa2

After Chuck Todd’s revelations, why is he the host of MEET THE PRESS one of the most influential news programs that allegedly holds politicians accountable? Why is the bar so low? It’s so painful for the rest of us who have actual skin in the game & so damaging for our democracy

If Chuck Todd had an ounce of integrity, he’d resign. He is utterly incompetent and is part of the problem that got us to this point.

He also ruined what was left of the proud TV show, Meet The Press which once was must-see Sunday TV. Now it is never watchable

The question is, what does Todd intend to do to correct his self-admitted “absurd naivete?”

And why is he still the host of “MTP” and NBC News’ “political director” a title he’s held for 12 years.