“We’d be better off’ if we gave everybody coronavirus. 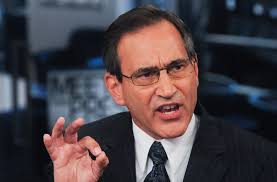 And with that, CNBC’s Rick Santelli, the network’s Lou Dobbs wanna-be relieved himself of another unhinged opinion in his one-man effort to save the stock market.

We remember the first time we heard of, and from, Santelli, back in February 2009, when he burst into a tirade against a relatively inconsequential Obama Administration plan to help homeowners who were underwater on their mortgages following the Bush-era stock market collapse.

“All you capitalists that want to show up to Lake Michigan, I’m going to start organizing,” he screamed from the floor of the Chicago Mercantile Exchange. “The government is rewarding bad behavior.”

And now Santelli has the answer to the coronavirus public health emergency.

When he was asked about the reason for recent market declines, he pointed to news coverage of the coronavirus emergency

“But maybe we’d be just better off if we gave it to everybody,” Santelli continued. “And then in a month, it would be over because the mortality rate of this probably isn’t going to be any different if we did it that way than the long-term picture, but the difference is we’re wreaking havoc on global and domestic economies.”

The follow-up question from the CNBC mannequin/anchor Kelly Evans after this stunningly stupid opinion was about yield spreads.

Just another day on a business news network.