Skip to content
If misery loves company, this story most definitely has legs. 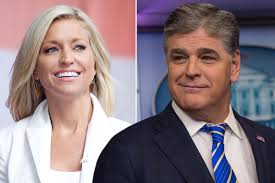 According to the New York Post, rumors are flying that Sean Hannity is dating “Fox & Friends” anchor Ainsley Earhardt — but the pair won’t confirm or deny it.

Rumors have been swirling that the two Fox anchors were a couple after Hannity, 58, and Earhardt, 43, were spotted together near his home on Long Island during the lockdown. Both Hannity and Earhardt are single.

Page Six exclusively revealed last week that Hannity and his wife, Jill Rhodes, have divorced after more than 20 years of marriage.

A source told Page Six, “The rumors started because Sean lives on Long Island, and Ainsley rented a house in the Hamptons during the pandemic. Sean has a studio at his home, and Ainsley has been using his studio as her remote broadcast location for ‘Fox & Friends.’”

Sources close to both Hannity and Earhardt had previously denied to Page Six that they are a couple.

Through a Fox News spokesperson, Hannity said today, “I do not discuss my personal life in public.”

Through the same spokesperson, Earhardt said, “Right now I am focused on raising my daughter. As anyone at Fox News will tell you, Sean is a wonderful person and whomever he chooses to date will be extremely fortunate.”

In a follow-up statement she added, “I am not dating anyone.”