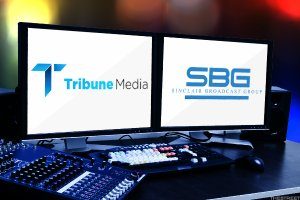 Sinclair Broadcast Group assures us that the “sky is not falling” because of its proposed, yet long-delayed, purchase of Tribune Media.

The FCC’s voluntary merger review “shot clock” has been on pause since January as Sinclair keeps coming up with endless revisions of the proposal, hoping for an FCC “thumbs-up.”

So in its latest filing, Sinclair got aggressively defensive, insisting that the “sky is falling” rhetoric of deal opponents is just flat wrong.

In its reply to various petitions to deny the deal at the FCC, Sinclair said that critics seemed to think it was still a world with seven TV channels and phones are just phones rather than video access devices.
“Sinclair’s acquisition of Tribune will not radically disrupt the media marketplace or impede viewers’ access to quality local news, nor will it violate any FCC rules or policies.”

Our hometown market is a Sinclair market, just up the road from where we are now.

We’ve seen that “quality local news” with an ever-changing cast of out-of-town faces passing through.

The one constant is the glowering face of Sinclair “chief political analyst” Boris Epshteyn and his “must-run” monologues in addition to whatever “must-run’ segments emanate from Sinclair’s Hunt Valley, MD HQ.

How Sinclair believes that this method of operation will save local news is beyond us.