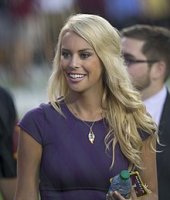 Self-regarding tv personality Britt McHenry has found her next gig.

She’s joining Fox Nation, the new 24-hour digital streaming service of Fox News, which so far consists of a box asking for viewer emails and a picture of the blondiful Tomi Lahren – to this date, the public face of the project.

You might remember that McHenry blamed her conservative politics when she was laid off in a round of mass cuts at ESPN.

You might remember that before that, she blamed her layoff on her race “because I was white and I made too much.”

You might also remember that she actually became famous due to a viral meltdown when she screamed at a parking lot attendant on camera in 2015.

“I’m on television, and you’re in a f—ing trailer, honey,” she said, referring to the employee as a “college dropout.”

You might keep in mind she has a tendency to be a jackass.

McHenry now co-hosts “Like It Or Not.” On Fox-owned WTTG in Washington.

Exactly what McHenry will do for Fox Nation has yet to be determined, but perhaps she and Lahren can have a blonde-off.

For its part, Fox Nation promises that once it actually gets up and running it “will take a deep dive into the big issues of the day with live exclusive daily streaming content and long-form programming available only to subscribers,” according to a press release.

Nobody at Fox News has commented yet.

Probably out practicing their cannonballs.