Dad always used to tell us kids “If wishes were horses, beggars would ride,’ an aphorism we couldn’t understand at six years of age and hit us like a brick when we were in our teens.

So as the bar talk at watering holes frequented by Cox employees comes around to the fate of the company’s 14 stations, inevitably the guessing game begins as to potential buyers.

Up in Boston, the immediate reaction to the news that Cox was considering sale options was that Fox would be very interested in adding WFXT to its portfolio. 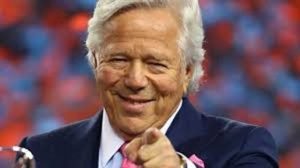 “What about Robert Kraft?” asks this item.

Kraft, back in the misty past before he became owner of the New England Patriots, was a minority owner of WHDH.

Susan Walker, a Boston University journalism professor who worked as a news producer at channels 4, 5 and 7 is a fan.

“I’d love to see Bob Kraft back in the TV business,” said Walker, who was a special projects producer at the station when Kraft was there. “Bob — buy it! He was personable and he would give story ideas to the assignment editors. “He would walk through the newsroom…he cared about people and he knew you by your first name. He was a contributor. He was a builder of community and certainly understood the role that good, strong news outlets play in that.”

Other supporters like the community connections that Kraft possesses.

One thing everyone weighing in on the matter is that the station needs to stay local because, to create a quote “Boston is different. It’s not like any other market.”

Which we have NEVER heard about any other market or local station on the block – have we?