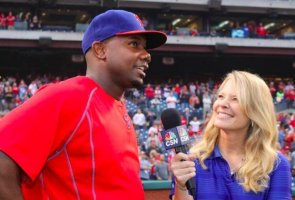 After 19 years on the air covering MLB’s Philadelphia Phillies and holding down an anchor slot at the former Comcast SportsNet (now NBC SportsNet), Leslie Gudel seems to be enjoying the relatively anonymity of her new job.
.
Two years after she exited the business for reasons never explained, and which she never bothered to ask about, she’s just begun selling real estate in suburban Philadelphia.

And her former celebrity is something of which her clients seem to be blissfully unaware.

Gudel is just one personality in an exodus of talent that’s been forced off in recent years amid a rebranding to NBC Sports Philadelphia and a shift away from original reporting to more opinion and debate, aimed at attracting more millennial viewers.

She spent some time looking for another on-air job, but family considerations were among the reasons she elected to stay in the Philadelphia area and pick up the career she had before going into broadcasting – real estate.

It was an industry she knew well; her father owned a real estate title company and her stepmother was a realtor.

“I was actually born into it pretty much,” Gudel joked. “I grew up as a daughter who could never really explain what her dad actually did.”

She has yet to sell her first house, but she has a list of potential clients, several of whom date back to the six years she covered the Phillies and the years of being the first female sports anchor in the market.