If your show is fronted by the Three Dumbest People on Television, and its spinoff has two runner-ups, it stands to reason that your staff is not going to set the world on fire with collective IQ.

To recap, ICYMI, program producers planned to tee up a Democratic candidate who had been somewhat supportive of Immigration and Customs Enforcement.

The segment was supposed to be a series of lobs to Democratic Arizona congressional candidate Ann Kirkpatrick, who was supposed to then utter Administration-friendly quotes that could be served up throughout the day.

But the wrong guest was booked. 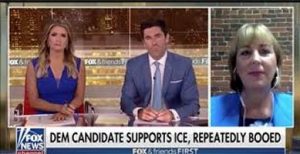 The show, instead, somehow got Massachusetts Democratic state senator Barbara L’Italien, who proceeded to lecture the befuddled hosts (that’s a redundancy for “F&F,” we know)
“I feel that what’s happening at the border is wrong. I’m a mother of four and I believe that separating kids from their parents is illegal and inhumane. I’m actually Barbara L’Italien. I’m a state senator representing a large immigrant community. I’m running for Congress in Massachusetts. I keep thinking about what we’re putting parents through, imagining how terrifying that must be for those families, imagining how it would feel not knowing if I’d ever see my kids again. We have to stop abducting children and ripping them from their parents’ arms, stop putting kids in cages, and stop making 3-year-old defend themselves in court.”

Of course, the segment was cut short when the planned script wasn’t followed.

And it brought to mind past “F&F” missteps.

Like back in 2012, when the show sought an unemployed, college-age individual who’d once believed in Obama’s “hope and change” but then decided to support the Republicans’ Romney-Ryan ticket.

Prankster, aspiring comedian and former University of Texas student Max Rice ended up on the show.

For two excruciatingly awkward minutes—punctuated by cringe-inducing moments of silence—Rice confused and enraged host Gretchen Carlson as he made a mockery of the show’s pre-scripted narrative that jobless college kids hated Obama.

Yes, the segment was ended abruptly.

And back in 2008, the show booked Alan Corey, the author of get-rich-quick book “A Million Bucks by 30.”

He sent a stand-up comic in his place.

The comic, who was never found out – and never read the book he was supposed to be talking about, spent the entire segment spouting nonsense like “I believe we all become our own grandfathers someday. It’s an old Navajo American-Indian saying. But I believe that’s what happens to us spiritually, so what I do is I carry a change purse.”

The professional Jefferson impersonator took a few moments to read from the Declaration of Independence.

The hand-selected excerpts he read:

“He has endeavoured to prevent the population of these States; for that purpose obstructing the Laws for Naturalization of Foreigners; refusing to pass others to encourage their migrations hither, and raising the conditions of new Appropriations of Lands.”
“He has obstructed the Administration of Justice, by refusing his Assent to Laws for establishing Judiciary powers.”
“He has combined with others to subject us to a jurisdiction foreign to our constitution, and unacknowledged by our laws.”
And finally
“A Prince whose character is thus marked by every act which may define a Tyrant, is unfit to be the ruler of a free people.”

No one on the kurvy kouch, the control room or out in the field caught it.

Nor, evidently, did the show’s most faithful viewer.