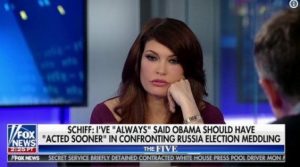 The latest developments in the matter of the quickly-departed and not-missed-at-all Kimberly Guilfoyle is that the former Fox News anchor perhaps identified a little TOO closely with her mentor Roger Ailes.

Guilfoyle’s exit was evidently triggered by the results of an internal Fox investigation into allegations of inappropriate behavior including sexual misconduct, and that her lawyers had been involved since the spring.

Six sources told “Huff Post” that Guilfoyle’s behavior included showing personal photographs of male genitalia to colleagues (and identifying whose genitals they were), regularly discussing sexual matters at work and engaging in emotionally abusive behavior toward hair and makeup artists and support staff.

Behavior worthy of an Eric Bolling, a Bill O’Reilly or a Roger Ailes.

Her punishment – a soft landing at a Trump PAC, evidently engineered her current steady, Don Jr.