Remember when Rudy Guiliani was coherent? Well….compared to recently anyway.

Even Fox News is getting a little irritated with his ramblings, walkbacks, flip-flops and sheer nonsense. 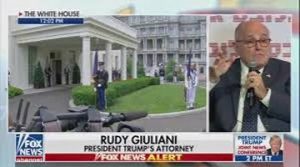 Guiliani called in to “Outnumbered” Monday afternoon to try and clear up his remarks earlier in the day about the Don Jr. Trump Tower meeting and some kind of second meeting that may or may not have happened, which only invited more questions from the Fox hosts.

“What we heard you say today was the president was not at that meeting,” host Harris Faulkner said. “That actually takes on a question that has not been asked or even suggested. So why did you say that?”

To which Guiliani then denied that a second meeting took place.
“I am telling you the meeting didn’t take place, never happened, he had to handle it himself.”

Further, from Guiliani:
“Two alleged meetings, first meeting, a group people, not the president––that group of people says the meeting didn’t take place, only person who has alleged it is Cohen. Second meeting, the President’s office, in walks Donald Trump Jr., says, ‘Let me meet with the Russians,’ never took place, didn’t happen.”

Baier cut right to the center of what has been the news all day, since Giuliani went on a morning show blitz: his new tactic of saying that collusion isn’t illegal anyway.

“I think that that call was in part to be a cleanup on aisle five on previous interviews in which it seems like Rudy Giuliani was moving the goal posts as far as what either the president believed, or, you know, what collusion was, or was it a crime,” said Baier. “Listen, he said, ‘If there was collusion, it wouldn’t be a crime, but there’s not collusion’, so he wanted to make sure that got out there.”

“You know, technically he’s right, I mean, the crime, in statute,” he said, “is not collusion, it is conspiracy. To work with a foreign agent, foreign power to steal an election, essentially. And there’s a number of technical ways you would get to a crime there.”