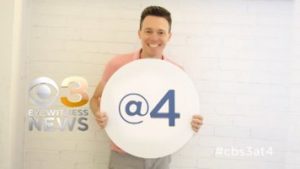 The launch will leave WTXF, the Fox O&O as the only station in the market not airing a 4 pm newscast.

The station promo hyping the newscast features faced paced shots of the station’s talent “holding” circles with “@4” on them, many of them shot around the city or station.

The building excitement is palpable.