A new anchor showed up this morning on Baltimore’s WJZ, a CBS O&O. 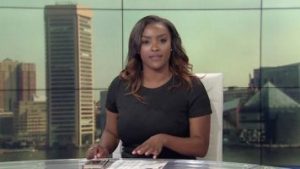 Nicole Baker came to the station after three years with Hearst’s WJCL in Savannah, GA.

She starts ten days before the morning show expands by half an hour to start at 4:30 on August 20.

Don’t settle into the routine just yet.