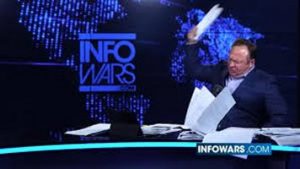 artist/conspiracy theorist Alex Jones and his InfoWars web of tinfoil-hat sites, the app for accessing the sites is trending across the country.

On Wednesday, InfoWars was the No. 1 overall “trending” app on the Google Play store.

The surge suggests the tech industry’s recent action against Infowars has drawn new interest to the fringe outlet and the conspiracy theories it peddles.

Still, the action by the tech companies likely reduced the overall audience for InfoWars because it had relied so much on viewers from Apple, Facebook and YouTube, a unit of Google.