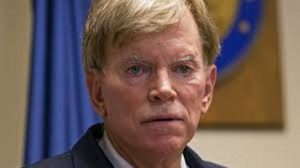 So far, the only person of note who approves of Laura Ingraham’s headlong descent into what can only be described as unfiltered white nationalism is….David Duke.

Even Ingraham is now trying to walk back her rant.
“The purpose of last night’s angle was to point out that the rule of law – meaning secure borders – is something that used to bind our country together. And despite what some may be contending – I made explicitly clear that my commentary had nothing to do with race or ethnicity, but rather a shared goal of keeping America safe, and her citizens safe and prosperous.”

Which was locking the barn door after you let the horse out. 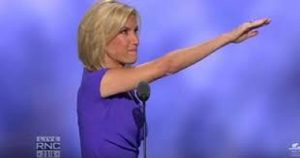 On her previous Fox vaudeville hour, Ingraham appeared to condemn the notion of even legal immigration:
“The America we know and love doesn’t exist anymore. Massive demographic changes have been foisted on the American people, and they are changes that none of us ever voted for, and most of us don’t like … this is related to both illegal and legal immigration”

This certainly isn’t the first time xenophobia has reared its ugly head in American media.

In fact, Ingraham’s rant could from the Native American (Know-Nothing) Party manifesto of 1855 that assailed the influx of German-Catholics…or maybe the preamble to the Immigration Act of 1922 that shut the door on Southern Europeans..or….or a screed about Irish-Catholics from the 1840s.

So why be surprised that former KKK leader and white supremacist David Duke would heartily endorse the rant?
“One of the most important (truthful) monologues in the history of MSM,” he wrote in a now-deleted tweet.

And let’s face it, Ingraham is a little late to the party.

This has been Tucker Carlson’s schtick since he got himself a prime-time perch in the Fox prime-time entertainment pantheon.