None of the rules apply to this guy. 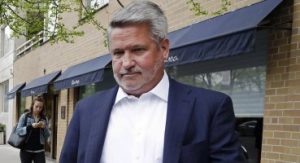 Bill Shine, the newly-minted communications director for the Administration – pieces like this one for “The Washington Post” by reporters Sarah Ellison and Philip Rucker that expresses a wide-eyed wonder at Shine’s production sense.
“Shine learned from Roger Ailes that two things get media attention: pictures and problems,” said a senior White House official. “He looks at things visually, which is how Trump sees things.”

Well so the guy knows how to fix lighting.

But, in a holdover from his days as an Ailes enabler, Shine recently banned CNN White House correspondent Kaitlan Collins from attending an open-press Rose Garden event after she asked Trump a barrage of questions earlier that day during his meeting with European Commission President Jean-Claude Juncker.

The president said he wanted to do something, and Bill did it,” said one Shine confidant.

“He couldn’t care less what Kaitlan Collins or the press think of him,” said another. “He’s working for one guy.”

Or take this piece from the Associated Press, which strikes the same theme.

The former news executive, who was formally brought into the White House last month as deputy chief of staff for communications, has yet to move into a permanent office or bring on his own staff. But he is already putting his mark on the West Wing, clashing with reporters, improving the production quality of White House events and trying to shape the message of an administration whose communication strategy has always seemed haphazardly dictated by tweet.

Shine is an image guy.

Not a communicator. Not an information source.

And all of this is prologue to the most recent development of this former “news” executive and enabler of sexual predators.

Mr. Trump’s top lawyer Don McGahn would have us swallow, hook, line and sinker the position that it is “in the public interest” for the White House’s top communicator, Bill Shine, to be excused from federal ethics laws so he can meet with Fox News.

Along with Larry Kudlow, former CNBC commentator and current Administration economic advisor, Shine been excused from provisions of the law, which seeks to prevent administration officials from advancing the financial interests of relatives or former employers.

“In the public interest?”

“The Administration has an interest in you interacting with Covered Organizations such as Fox News,” wrote McGahn in a July 13 memo granting the ethics waivers to Shine, a former Fox executive. “[T]he need for your services outweighs the concern that a reasonable person may question the integrity of the White House Office’s programs and operations.”

Ethics, in this Administration’s perception, are written on rolls of Charmin and are to be used accordingly.

But hey, as long as the Fox News prime-time entertainment lineup and the morning moron marathon known as “Fox & Friends” continue their cheerleading, what the hell.