It’s an oft-repeated phrase on the local level when a newsie decides the hours are too weird or the front office decides that a contract won’t be picked up.

You rarely hear it at the network level, if ever. 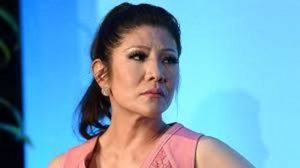 Now we have, as Julie Chen….Moonves…made her exit after nine years as one of the regulars on CBS’s “The Talk.”

After all, it’s kind of tough to be part of a program that tackles topics like the #MeToo movement when your significant other is on the list of offenders.

Awkward is the word that comes to mind.

She didn’t appear live for her final appearance, sending along a recorded message from her other CBS program, “Big Brother” which, we are informed, she will continue to host. The season finale is coming up in another week and then….who knows?

Her farewell message was saved for the waning moments of Tuesday’s program.

She did not mention the more than a dozen sexual harassment and assault allegations against her husband.

Nor did her hosts, who thanked Chen for her “kind words” before quickly signing off, ending the show and getting the hell out of the studio.