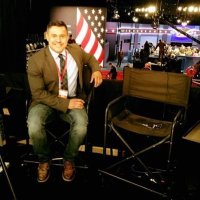 After 13 years at the Fox News Channel, Fin Gomez joins the CBS News White House unit as a producer.

Most recently, Gomez as the lead producer for Fox News’ chief White House correspondent in the booth, and was assigned to cover Hillary Clinton‘s 2016 campaign.

Another addition to the CBS White House contingent is Katie Watson, who will be the beat reporter for the CBSNews.com website.

She’s been with the website for a little over a year and a half.