We have one here in Da Burgh, at Hearst’s WTAE and it has become our go-to morning newscast, although we are not averse to channel-surfing after the passage of two or three 20-minute news wheels. 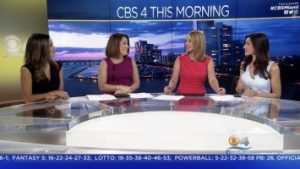 But in Miami, three…count ‘em…three… of the major English-language broadcast stations in the market have gone to all-female anchor teams in the morning.

NBC O&O WTVJ has paired Roxanne Vargas with Sheli Muñiz for the 4:30 a.m. to 7 a.m. newscasts.

And CBS-owned WFOR now has an all women-morning team after pairing morning anchor Lauren Pastrana with Marybel Rodriguez and Bianca Peters.

Only Berkshire Hathaway’s WPLG continues with the traditional male-and-female format in the mornings, with Eric Yutzy and Jacey Birch.

Mornings seems to be in the forefront of this trend.

The traditional male-female pairings continue to be the norm – in Miami and across the country –on late afternoon and  evening newscasts.

The raised profile of women fronting newscasts comes naturally:
“For a number of years, there have been more women than men going into television journalism, and I think part of what we are seeing is the result of that,” said Scott Libin, chairman of the Radio Television Digital News Association.