Pat Minnis’ on-again-off-again tenure at the station between 1992 and 2002 was punctuated by stints in New Orleans and Baton Rouge.

These days, Minnis is a State Farm Insurance agent in Tempe, AZ. 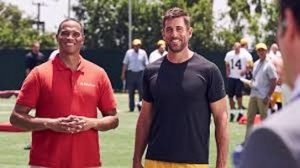 It was that role that helped land him in a tv commercial opposite State Farm’s national spokeman, Green Bay Packer quarterback Aaron Rogers.

“In June, someone from State Farm marketing called looking for agents to be in these commercials,” Minnis recalled. “They said, we want you to audition by Skype. So I did, and they said they were going to be looking at a lot of people but, the next morning, they called and said, you got the role. And I was like, the role for what? And they said, an Aaron Rodgers commercial. We need you to fly to Hollywood first thing Saturday morning.”

He called the experience a good one, thanks to his co-stars Rodgers and David Haydn-Jones. Hayden-Jones plays the sports agent.

His second career, which also help stabilize his home life, brought him a shot at another 15 minutes.

“It’s weird,” Minnis said. “I spent 17 years trying to make it to national television. And now I’m an insurance agent and I’m on national TV. But the best part is, I’m hearing from so many people in Lafayette. That’s been the best part of it.”