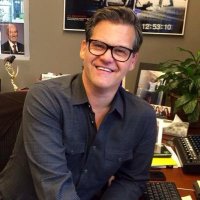 Which means that Ball will oversee editorial initiatives and create best practices around the production of original video and audio content for all platforms including OTT, connected devices, streaming services and audio podcasting for Tribune Broadcasting’s stations and their properties.

Sounds a hell of a lot like a corporate news director to us, but…oh, yeah, multi-platforms and digital mean bigger words and loftier-sounding titles.

KTLA’s boss is thrilled.
“In nearly a decade running KTLA’s news operation, Jason has led the station to unprecedented growth in ratings and recognition through quality journalism, compelling coverage, strategic expansion and innovation. We are thrilled he will be sharing his talents across the station group,” said Don Corsini, President/GM, KTLA.

Ball has been with KTLA since 2008, following seven years at KCBS, KCAL and KNBC.